Suppose you are given a set of exchange rates among certain currencies and you want to determine if an arbitrage is possible, i.e, if there is a way by which you can start with one unit of some currency C and perform a series of barters which results in having more than one unit of C. Let's assume that

Drawing pictures would be a great start for solving this problem.

The relationships between the currencies can be represented using a graph: currencies will correspond to vertices, exchanges correspond to edges, and the edge weight is set to the exchange rate as shown below. 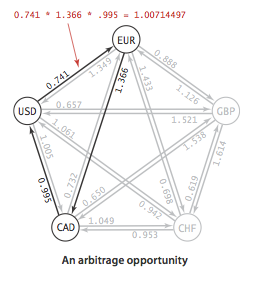 From our above observation, we go on converting a currency to other currencies in sequence and convert back that same current we started with (say, we started with 1 unit of currency A and hen converted it to B, then whatever we got after the conversion, we converted that to C and finally whatever we got from conversion to C we converted that amount from C to back to A), then whether we would make any profit or not depends on the result of the multiplication of the exchange rates involved. If the product of the exchange rates is greater than 1 then we would make profit, if less than 1 then loss and it is zero then we make no profit i.e, we we started with 1 unit of A then we will get back 1 unit of A. A, B, C, A clearly creates a cycle.

From above discussion we can say that if we represent relationship between different currencies through a graph, as discussed above, then an arbitrage situation will take place when the result of the multiplication of the weights of all the edges forming the cycle is greater than 1.
Say, the exchange rate from A to B is a, B to C is b, and C to A is c.
Then we have a arbitrage only if
a * b * c > 1

An arbitrage exists if the sum of the weight of the edges forming the cycle is greater or less than a threshold. What this threshold value would be would depend on how we convert multiplicative relationship into additive relationship.

So if we have x * y = z how can we get an additive relationship between x and y ?
We know logarithm of two or more variables results in addition of logarithm of each of these variable.
log (x * z * y) = log(x) + log(y) + log(z)
We also know
if we have a variable A then So using the following mathematical equations
a * b * c > 1
=> log(a * b * c) > log(1)
=> loga + logb + logc > 0, since log1 = 0
now the solution reduces to, if the logarithm of the multiplication of the exchange rates of certain currencies that form a cycle is greater than ZERO, then we have an arbitrage.
Or, as we have seen above: if the summation of the logarithm of each of the exchange rates is greater than ZERO, then we have an arbitrage. Which brings us to the conclusion: if we modify the graph and make the edge weights represent the logarithm of the exchange rates, then an arbitrage will form a cycle with summation of all the edges forming the cycle to be greater than ZERO. In short arbitrage will form a positive weight cycle. So if we have exchange rates as, say, A, B and C. In our previous graph A, B and C would be weights of 'three edges. Now as per our above discussion we will modify the graph and the weights of those same edges will be logA, logB and logC instead of being A, B and C. The graph would now look like this when we take log base e or ln: 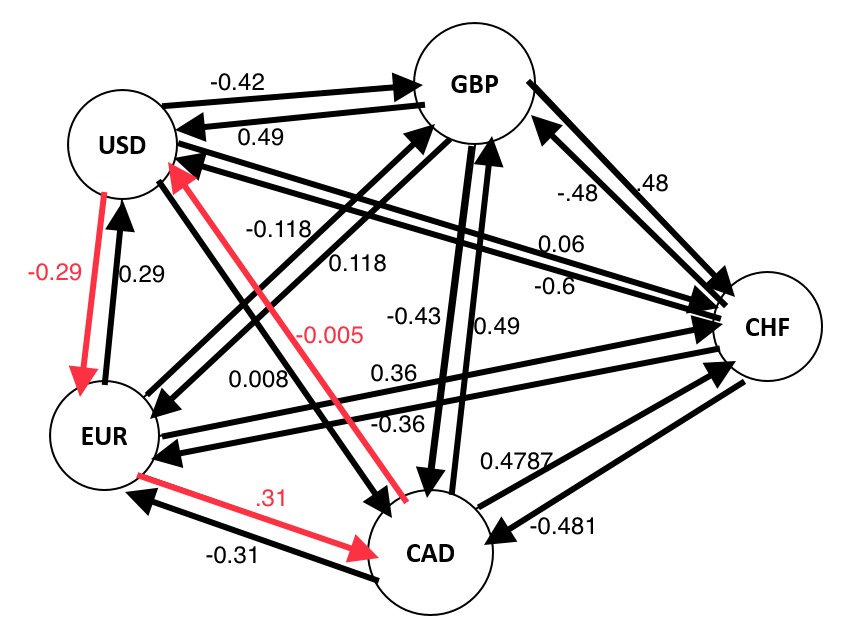 This implementation is based on our discussion in the Bellman-Ford Algorithm & Negative Cycle Detection chapter.

Even in the absence of an arbitrage, the above understanding will come handy.
Say, we want to convert currency A to currency Z and there are several ways of reaching Z from A. Basically if we have a graph with vertices representing the currencies and the edge weights the exchange rates, the graph has more than one distinct path from A to Z. In this case, we are to find which path would be the most profitable then that would mean maximizing the result of the multiplication of the exchange rates.
This would mean if we modify the graph make the edge weights represent the logarithm of the exchange rates then this would mean that the longest path from A to Z would give us the most profitable way to convert.
When we modify the graph further and make the edge weights represent negated logarithm of the exchange rates then the shortest path between two currencies will give you the most profitable path of conversion between the two currencies.
It's amazing how the Arbitrage problem reduces currency conversion to a shortest-paths problem which helps us solve (1) finding existence of any arbitrage, as well as (2) finding most profitable way to convert currency A to currency B.