The transition from one state to another is depicted in the state machine diagram below. State Machine Diagram: 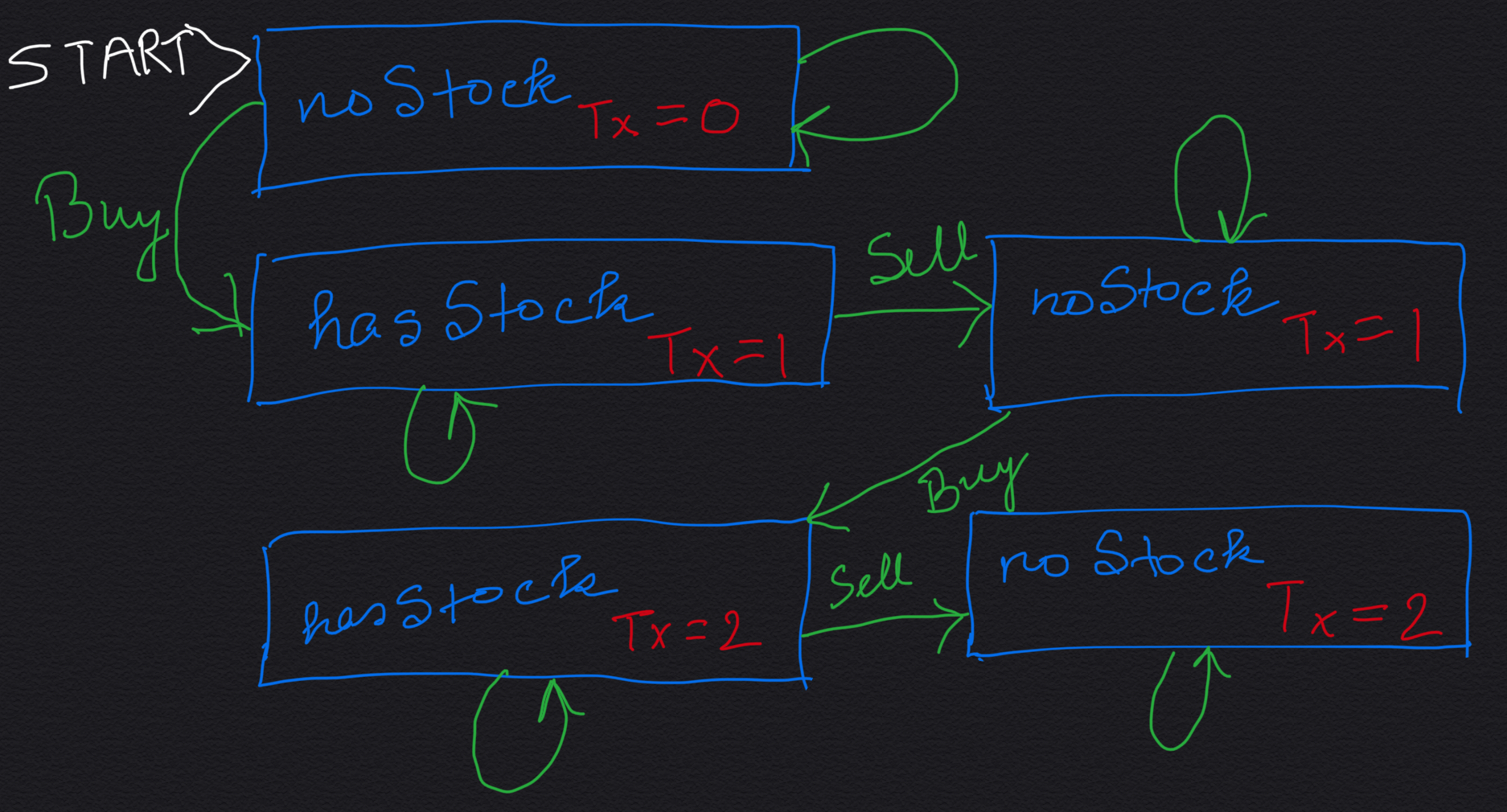 hasStock state for second transaction can be reached by one of two ways:

Following the discussion above and the state machine diagram we get the following recurrence relation:

hasStock[0][0] = -stockPrices with zero-based indices
hasStock[0][0] denotes maximum profit on first day with 1 transaction with one stock in our possession.

noStock[0][0] = 0, since if we are in noStock day at the end of the first day and we are already part of transaction#1, that would mean that we have made a purchase and have also sold it. So profit made = -stockPrices[0] + stockPrices[0] = 0. Since we are buying and selling at the same price, net profit = 0;

On the first day, if we have made two transactions and at the end of the day we one stock in our possession then that would mean that we made the first transaction (purchased and then sold at the same stock price) and made zero profit and then bought one stock as part of second transaction.
hasStock[0][1] = 0 - stockPrices[0] = -stockPrices[0]


The above code can be further space optimized using the observation that for computing hasStock and noStock values (for both one transaction and two transactions) for day i, all we need are hasStock and noStock values from day (i - 1) for one transaction and two transactions. So all we need are eight variables instead of two arrays of size n, where n = given number of days, giving us O(8) = O(1) space complexity instead of O(2n) = O(n) space complexity.

How would you Compute Optimal Path to maximize result, i.e, the days on which you would actually buy and sell stock(s) in order to maximize profit ?

In almost all the DP problems, finding the path that resulted in the optimal result takes little bit more thinking than just computing the optimal value.

Thought process involved in the solution:
An important part of this problem is the constraint on maximum number of transaction we can commit. In our case, it is 2.

Let's think backward and start from 2nd transaction and let's see how we are making progress. We first need to know what is the purchase and selling price for the 2nd stock. Once we get that we would move to the 1st stock. The whole code is based on this simple observation.

Don't forget to look at the other problems in our State Machine Approach series to have a strong understanding and a good command of this concept: